The second of the Light Lances. I decided to try out something else for the armour and leave it black, with gold trim. I may do this for the whole unit, to set them further apart from the pistoleers and the greys. Again, I used one of the separate feathers on the helmet. 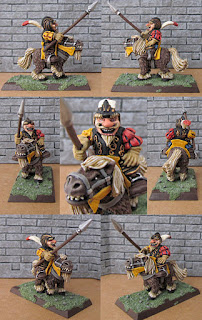 The two lancers  so far. I may redo the first one's armour in black too. 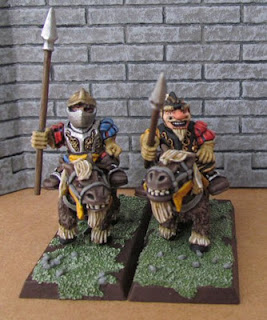 Second figure for the Imperial Dwarf Greys. I used one of the separate feathers that come with the sets on this one. A quick hole drilled in the back of the helmet, feather inserted and voila. 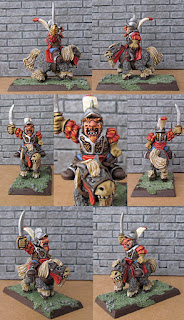 The two members of the unit so far: 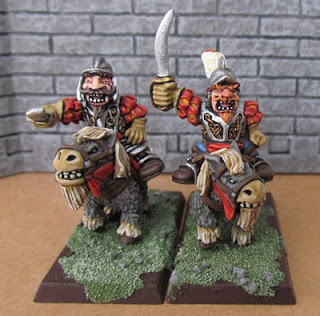 I've been silent for a long time about the goblins, but I finally have an update. Kev's been busy converting the existing poses to add more variants and has gone way beyond expectations in making each one unique. He also added more heads and more weapon options. There are 8 new bodies (making for a total of 12), 10 new heads, a few variants for the existing weapons and a crossbow option.

These are now off to the mouldmaker and have been mastermoulded. I am awaiting mastercastings for one final check. If everything checks out, they're up for productionmoulding.

But in the mean time, have some pictures:

The heads (the missing one is visible in the above image): 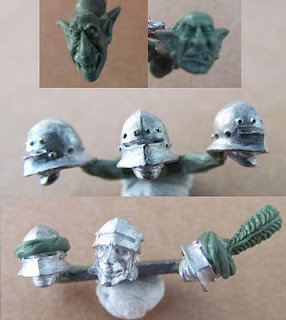 A closer look at the back and front of the bodies: 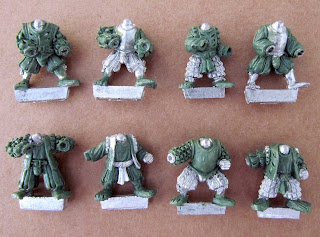 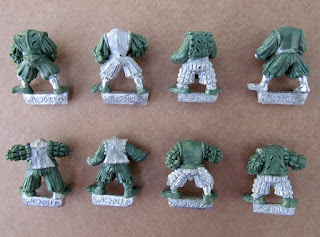 Some of the "plug-in" types in action: 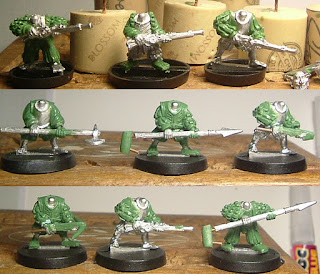 ﻿The sprues (spears and halberds have  been sprued up differently since. The little shield in the lower right corner has a hand attached to it. This will allow to use the normal (one-handed weapons) on the plug-in type bodies in combination with the shield for even more variety in the poses. 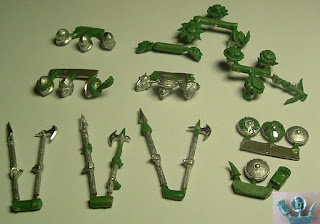 Something that was long overdue, the command figures for the Marauder Miniatures MB1 Dwarfs with pikes. It's only when I started editing the pictures I realised I forgot to finish their noses with my trademark "red nose". This omission was quickly rectified but by then the good light was gone, so you'll have to do with these pictures for now. 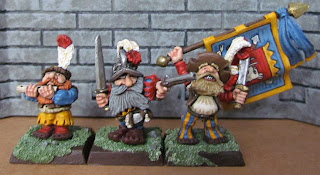 The champion. It's a great figure, but I don't think I did justice to it. I feel I could have picked the colours better. 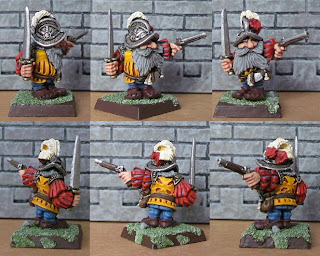 The standard bearer. A great figure that I decided to put some extra care in, with the striped trousers. The banner is made from my usual material of stiff, posable foil (the kind you find in little dishes for chinese food, premade lasagna's, etc... Since I don't eat that stuff, I simply bought some empty ones which can also be had in a lot of places). 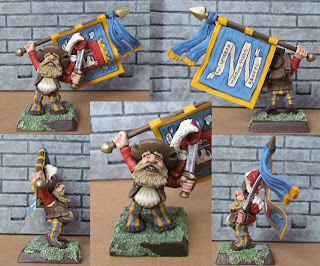 I'm rather happy with the little flag, even though the best part of it is hidden. It's a simplistic design, far from the little masterpieces others craft for their standarbearers. I remembered to take a picture before gluing it on, but after adding the curves. The shield looks asymmetrical in the picture because of the curve, but it's not. 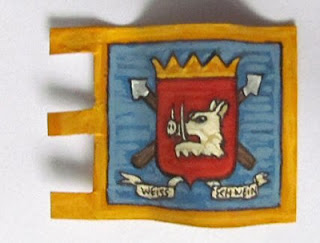 The musician, this is the least interesting figure of the three, but quite possibly the single example of a dwarf playing a flute. And it's still a good figure in it's own right too.

And finally, a couple long overdue group shots of the unit so far (25 dwarfs, more to add). They are a mixture of WK dwarfs, Marauder originals and a few marauder conversions. 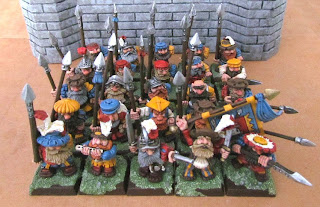 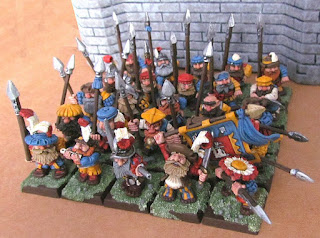 It's been a while, but the Dwarf ponyrider sets are now available (see the "Getting Some" section to the left or go here).
The following codes have been added: