I was going to sit on these a bit longer until I had some metal, but I can't just keep sitting in this pool of my own froth (I might drown). Having collected most or all the good models with a landsknecht theme out there, I still felt myself wanting more (addictions are like that) and it seemed the only way to get figures that would hit the right spot, was to have them made. I decided to start out with dwarfs, in order to fill out the incomplete ranks of (mainly) old Marauder figures and some modern Foundry (though the latter just don't seem to strike the same chord).

Now this is first and foremost a private project. These are figures I wanted made for myself and not everything about them may appeal to a broader public. This is not a commercial venture and there are no plans at present to make it one. Even so, I see no reason not to sell some to interested people once they are available (call it an act of charity, if you wish ;) ). There are no plans to become a real shop though.

First thing was to find a sculptor who could delivery the quality AND who gets what it is that gave those old school models of my younger years their charm and character. I immediately thought of John Pickford (of Otherworld giant fame) and I think he came through big time with the models. I can't stress enough how my pictures don't do justice to the models. They are very crisp and clean in the flesh. Any limitations designwise are my fault and not his, as I wanted to capture the look and feel of those golden age models, with all the good and the bad that that entails. In order to give him some time to get familiar with the subject matter, I suggested to start out the first ones with the most static poses, so don't blame the sculptor for that, it's what I asked. There will hopefully be many more poses and troop types farther down the road.

Since I hate units with loads of clones, I wanted to make the most out of my buck and get them to be modular: separate heads and separate weaponhands. For this first set, there are 4 bodies, 8 heads and 4 weaponhands (only 3 shown, the 4th is another poleaxe type weapon). All heads are interchangeable (as pictures demonstrate) (and of course, some heads are bound to look better with certain bodies, but all in all it works pretty well, without detracting from the final look. As said, more poses and trooptypes will follow and the aim is to make parts (especially heads) interchangeable between as many sets as possible for maximum customisation possibilities.

Anyway after this long introduction, some pictures featuring all of the heads on all of the bodies (and 3 of the weaponhands). They are just tacked together and in some pictures the hands have come away from the arm, but this would not happen if they were glued together. 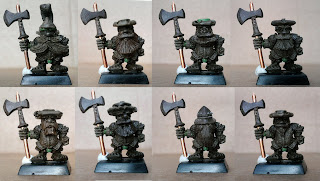 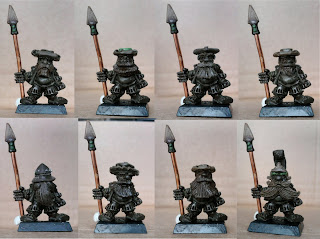 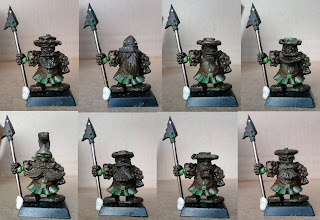 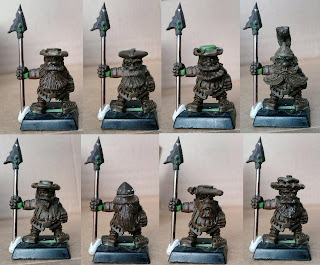 First of the classic Marauder dwarf pikemen from the MB1 regiment. 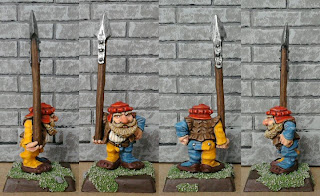 2 more Marauder dwarf handgunners. These are of the plug-in weapon variety, as seen in the crossbow unit too.

Group shot of the unit so far: 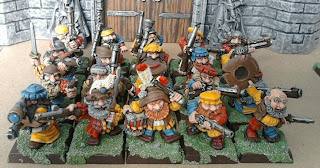 Inbetween adding new painted troops to the army, I've also taken to touching up the old ones, as my painting style and level has evolved greatly. I'm not going for a perfect match as that would require a complete repaint, but getting them close enough so they don't stand out on the table when put next to eachother. Latest one to get the treatment is my old helblaster: 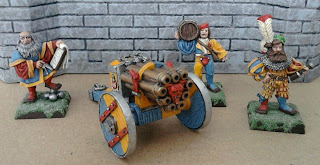 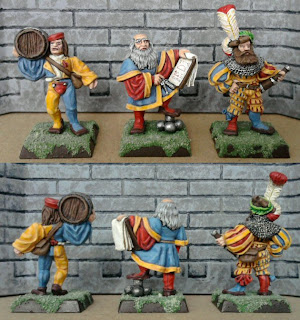 This is what they looked like before (and the picture was flattering): 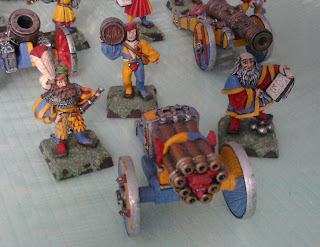