Here's a few quick snaps of the mastercastings for the ponyriders. There are a few minor issues with the rider body to the right, which will be fixed before productionmoulding. 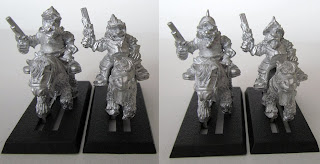 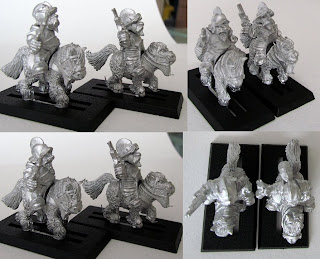 The various bits included in the set: 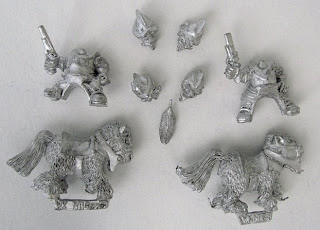 A quick comparison shot of a cavalry figure with a couple Marauder dwarfs on foot: 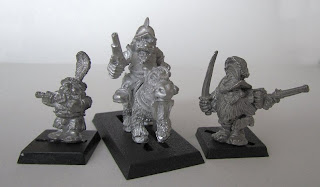 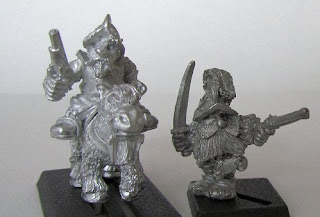 The pictures aren't great, but here's a first look at the metal mastercastings of the dwarf wenches and floozie. The serving wenches are a tad taller, though this is amplified due to the tab not being inserted deep enough in the slotta bases for the picture. I might ask John to shave a mm of the underside of the dress on the castings that will be used to make the productionmould. 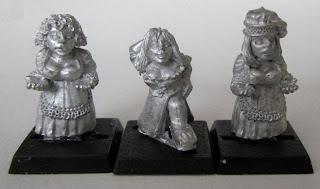 A closer look at the wenches and the floozie. I've only loosely put the tray with the plate in place and it's not glued on, so may not be in the most optimal position possible. 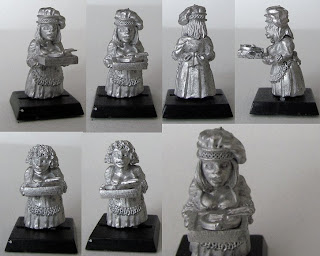 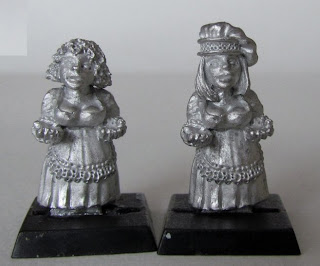 A (badly lit) picture of all the bits: 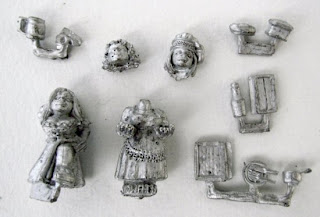 And a comparison with a couple Marauder dwarves I had within reach when I took the pictures. As you can see, the girly dwarf is about on par with the taller marauder dwarfs and a bit taller than the shorter ones. 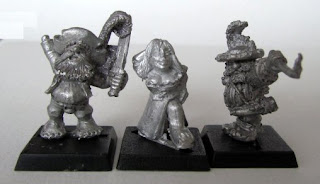 I have a few mastercastings in my possession for the ponyriders and wenches and John will start in a couple weeks with the conversions to round out the cavalry set.

Years and years ago, I did a few conversion tutorials for my old site, including one on converting Imperial horse heads. I've since moved on to other techniques and sculpting tricks, but it occurred to me that my overly detailed and simplistic approach of the day might still be of interest for someone who's just starting out. So I've decided to reproduce it here (with minimal editing).

What was true then, hasn't changed today even though at least 5 years passed and it was probably more: A major drawback with GW imperial horses is the fact that they don't have many options in their armoured horses. They still use the same two plastic variants they've been producing for years, with the sole addition of a third head variant with the knightly order sprue.

Closer examination of the knight sprue gave me the idea of creating a few head variants myself. They can range from fairly simple conversions using a knife, some plastic bits and a drop of glue, to more complicated modifications that will require a fair amount of greenstuff. This article will include one of both.

The most basic conversion is to start from a standard armoured horse head and a plastic standard top.The knightly order sprue comes with 3 different standard tops: a skull, a panther and a wolf. Two easy steps: first, remove the spike on the horse's head that makes it look like a unicorn. Then replace it with the standard top. Voila, instant first knight or grandmaster horse head. It may sound simple, but it looks really good if you reposition the horse to rear up on it's hind legs. Easy and effective. The same can be achieved using the crests from spare imperial or bretonnian knights heads for more variety, or even other items like human skulls or whatever suitable bits you have left over from other projects.

Now for something a bit more complicated, if you feel up to it. The next conversion will require some greenstuff, a spare plastic knight head and a plastic horsehead. The same techniques can be applied to a metal horsemodel you have lying around if you want. If you stick with the plastics, there are a few possible options. You can start from a basic armoured horse head like before, or from one with cloth barding (old empire or bretonnian) or a bare head, in which case you'll have to sculpt the pieces of armour as well.

In this example I chose to go with the old imperial barded horse head (most of you probably won't even remember this one). The advantage of this older head lies in the fact that it's just slightly slimmer than the other ones, thus giving more opportunity to add layers without it getting too big. But that doesn't mean you can't use the other heads with equal or better results.

Next will be to look for a suitable knight crest to add to your horse's head. When you've selected an appropriate one, cut it off.

I recommend that you remove the original horse ears with a knife (watch out for your fingers). They're not that well made and they'll only get in the way (the ears, not your fingers) (I think). You can now glue the knight's crest or feathers to the head. Don't worry if it's not a seemless fit, as we'll cover that up later on. You can skip ahead to that part now if you used an armoured head to begin with.

If you used one of the clothbarded or unbarded heads, now is the time to start sculpting some armour. We don't want to make this too hard as it's our first one, so we'll stay close to the standard issue. If you're new at this, I'd recommend you work on one part at the time and let it cure. It's very easy to accidentally put you're finger on some freshly sculpted detail while you're working on the other end of the model. For the frontal plate, there's not much to describe. Start with a small more or less rectangular piece of green stuff in the middle of the front, use your sculpting tool (or scalpel or clayshaper or whatever you use that has a flat side) to gently press some of the (excess) greenstuff into the locations where you want it (e.g. around - but not in - the eyes). Try to roughly shape the facial armourplate like that. If you don't have clayshapers or another smoothing tool, you can use your finger to gently roll a wet toothpick back and forth over the greenstuff, to give it a smooth and even texture. The wood will hold the water for a longer time, so that it doesn't stick to the greenstuff and the rolling motion will flatten the surface. You can then use a knife or appropriate sculpting tool to "cut" away the excessive greenstuff around the edges of the facial plate and giving it it's final shape. After doing this it is possible that you'll have to smooth part of the surface again.

Next are the plates for the neck piece. Easiest thing is to do them one at a time. Start with the lower one with a small rectangle (although you could probably work from the top down as well). Even the texture as described above and shape the edges like before. Use your sculpting tool (knife, toothpick, dental tool, whatever) to press some of the greenstuff away from the top section of this new neckplate towards the lower section, so that it is thinnest at the top where it will be covered by the next, overlapping plate. The first plate is done. Now add a second rectangle (make sure they're about the right size, so you don't end up a few mm short at the end) and let it slightly overlap the thinnest top section of the prevous plate. Shape this plate as above and continue the same process until you're all the way up.

After this has cured, it's time to cover up the joint between the crest and the head. Roll out a tiny snake of greenstuff, not too thick and just long enough to go around the bottom of the crest. Don't flatten it, except maybe in the spots where the ears have to come. Next, go with the blade end of your tool all the way around to impress diagonal lines to get that typical twisted ribbon effect. Afterwards it's easy to add two new ears with greenstuff (basically, small triangles that you stick to the figure and push into place with the sculpting tool).

Because I found this old head to be a bit slimmer than the regular plastic horseheads, I also added a thin additional layer to the cloth barding, but that's a simple task and I won't bore you with the details.

All those static "at ease" poses are very well for filling out the ranks, but you need some more active poses for your front ranks too. These should go some way towards meeting those needs: 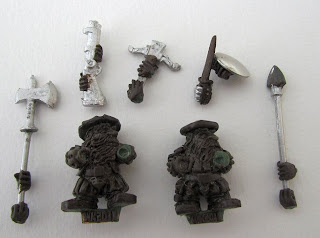 Sculpted by the talented John Pickford as always. The halberd shaft has been slightly shortened since this picture was taken. After the moulding, the two bodies will be converted to add another two variants, thus allowing for 20 different configurations.