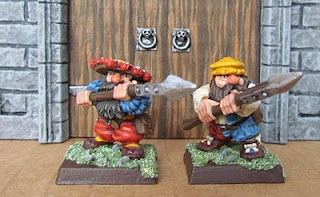 The first one is the one from the legendary MM15 set, which explains why he got a bit more attention from the sculptor. It's a single part model and looks great. I'm pretty happy with how he came out, as I think the colours work for him.

The second one is one of the marauder dwarfs with plug-in weapons (pikes, crossbows and handguns were made for them), and since I already painted copies of this body for my handgunners and crossbows, it's a bit less interesting, though I did manage to come up with another colour scheme for him that's different enough from my previous copies, while still respecting the general scheme.

Finished off another two figures for my dwarf halberdiers. I think I'm going to use a lot of sallet helmets with this unit. It helps to tie them together.

I used a couple bits from the "pouches and dagger sprue" (namely, a pouch and the dagger) on this one. These little details help to further customise the figures (aside from the head and arm options) and make each one look unique.

Another one for the pike unit, this time one of my plug-in types. Highlights sort of got washed out in the pictures. Unit is now 20 pikes strong, I will bring it up to 30 (including command) and then, after I rounded out some of the other units, I may expand it to a block of 40 or 50. 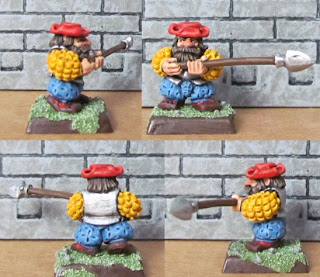 Seen here with the two halberdiers I did at the same time: 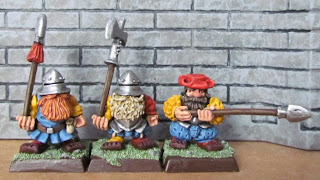 First of a unit of "Imperial Dwarf Greys". Where most other regiments rely on pistols or lances to soften up the enemy, the Greys charge directly in to battle with nothing but their swords, yelling out their defiance. They are famous for only riding grey ponies, making them instantly recognisable on the field of war. 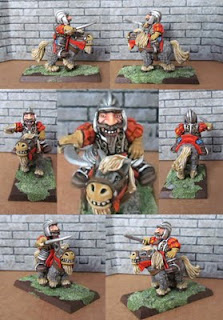 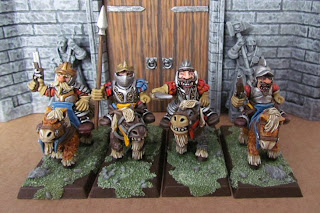 First of the Imperial Dwarf Light Lancers. Sort of botched up whatever is visible of the face (oops). This regiment will have dark brown ponies to set them apart from the pistoliers and the greys. 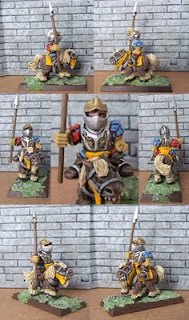 Side by side with an Imperial Dwarf Grey: 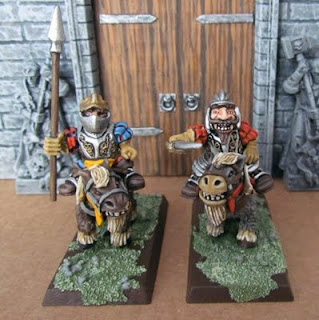