I've been sitting on these for a while now (a few months at least), hoping to share the whole set at once, but one can only be expected to sit one's own pool of froth for so long before cracking. So without further ado, here is the first half of a set of elite dwarf infantry: the Zweihänders. They are all equipped with plate armour, a greatsword that's taller than they are, and a handweapon in it's scabbard. And big floppy hats of course. As always, they are sculpted by the talented John Pickford.

First of, the unit champion. As befits his status, he has the biggest feather. I really like this pose a lot (which is a tribute to the old marauder ogre with greatsword).

Next, a couple of unit fillers: 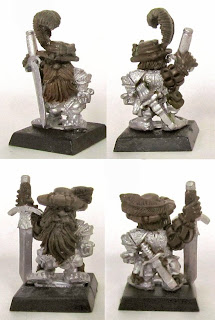 I call these unitfillers because of their relatively static poses and the possibility to swap heads around (also with those from other sets). 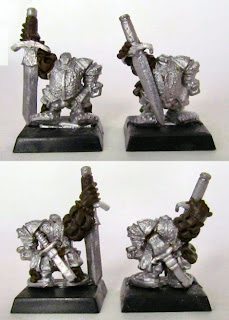 Talking about unitfillers supposes there are also non-unitfillers, which are some one piece dwarfs. As it's an elite unit, fewer variants are required, so it was the occasion to include some more varied poses and do away with the limitations imposed by the multipart nature of the other figures.

The first one is at the ready...

... while the second one is not afraid to take the fight to the enemy. 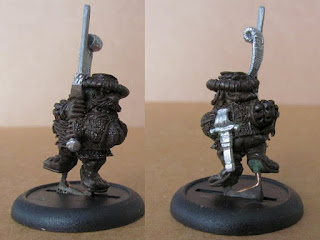 ﻿The next batch will include the rest of the command set and a few more poses and variants for the unit.
at 10:23 AM 1 reactions

I've been asked for a picture that shows the relative sizes of the dwarfs and goblins, so here's a quicky with a dwarf and a GW halfling.

As a reminder, here's the earlier picture with some Foundry orcs. 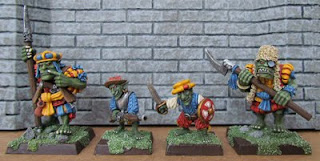 First building for the town

Last week at CRISIS 2011 I came upon a trader from France who had lots of those grey and red hard foam medieval/renaissance buildings (apparently made by/sold through Ziterdes in Europe,  though I've seen them under the Conflix label in the US). Now I had always  been sceptical about this stuff, but two of the buildings caught my eye that day and I had to admit they had quite a bit of detail on them and whoever made the original master put quite a lot of effort in them. I also liked how sturdy (and light) it all felt. There would be no need to worry about damage caused by someone accidentally bumping into it (you know who you are), or the bond of glue loosening as I always worry about on resin buildings. So I decided to take a chance and pick up the two I liked (the other is a watermill).

The true test of course would be how they look  with a coat of paint. After trying it, I think it works. Here's the first one, which is supposed to be a wizards house, but I'll probably use it as an apothecary or such.

Before and after view: 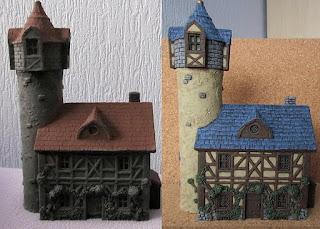 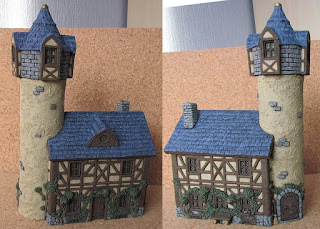 Close up of the front. 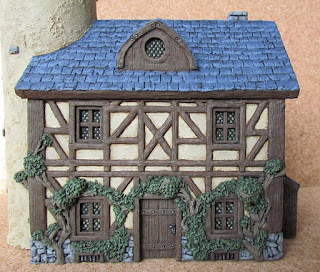 A view from the side:

The backside, with a figure for scale: 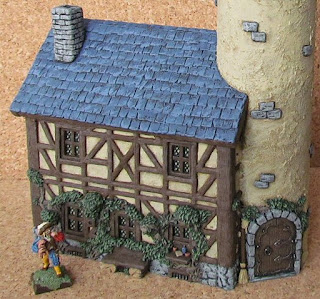 First two of the Goblin Halberdier unit. I decided to give all the goblins in this unit helmets (luckily, I have 4 variants, so they don't all need to look the same) and a majority of them breastplates. This will give them a certain uniformity. I'm quite happy with how they look and the helmets almost give me a LOTR vibe. The scrolls on the shield read "We Be Goblin" (mostly because there wasn't enough room to add the "s" at the end). 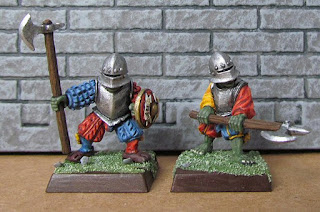 Goblins with Spear and Crossbow - part 1

While the goblins are with Pete Brown for productionmoulding, I couldn't resist temptation to paint a couple spare mastercastings of the new ones. Last time I painted one with sword and shield and one with a handgun, this time I'd do one with spear and shield, one with a crossbow and two with halberds (see separate post).

The one with the spear uses one of the handless "shooter" bodies and the shield with a hand already sculpted onto it. I noticed after assembly that the shield is pointing a bit to the ground. It could have been placed differently with a quick pass with a needlefile on the sleeve. Hopefully this option will help to make them look sufficiently different from the "thrusting the spear with both hands" option (as seen on the second halberdier in the previous picture) and add to the variety. Oh, and the little scroll on the shield says "Up Yours". They may be dressed as civilised beings, but they're still rude goblins after all.

The crossbow goblin. Not much to say, other than that I realised when I started painting it that if I'd given it a spear instead of a crossbow, he'd look a lot like the marauder MM15 pikedwarf.

A group shot with the other two: