I wasn't happy with the way the left arm on the stretcherbearer looked (somewhat short, too far out and more puffy than the right arm, all due to trying to accomodate for the slightly large width of the stretcher I made earlier), so off it went and now the figure looks much more natural. Both arms are now the same length and thickness. I need to tidy a few small things and then he'll be good to go.

Compared to one of John's uncoverted models and with a couple WIP headvariants to go with him (honestly, they look better in the flesh). 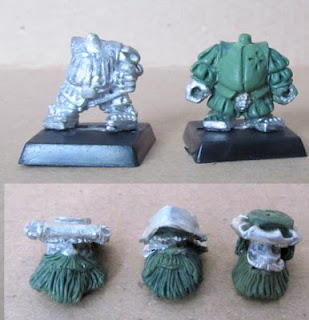 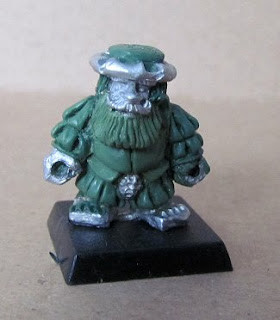 The tower is slowly getting there, here's another look at those windows. Not perfect, but it will do. 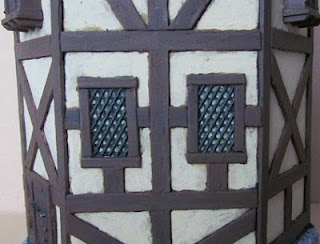 I'm currently in the middle of a lot of converting and scratchbuilding. For starters, I'm making an updated version of my dwarf stretcherbearer party, as I think I can make it better than the old one and perhaps cast up a few if the result is worth it. So far, it's going well enough, it's certainly better than the old one. Although I will have to tweak the left arm on the stretcherbearer body as it doesn't look right now (slightly too short I think). The left hand needs some work too:

﻿With a couple heads (head conversion still WIP) and next to a metal dwarf for size:

I've also started on the casualty figure. I think he'll have an integral head. The stretcher needs work too: 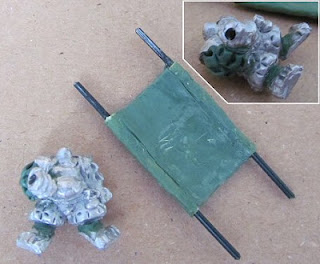 On an unrelated conversion, I'm also "imperialising a citadel dwarf from the handgunner set that came after the Marauder ones but before the current plastic ones. I really liked the idea for the original figure but it looked very flat and 2D. The addition of the wider helmet and puffy sleeves helps to flesh it out a bit. Still needs landsknecht shoes and a few little details:

Also WIP is this scratchbuilt tover, based on a hexagonal card box (see on the left in the image) I found in the craft section of a local store. I think the idea is to decorate it and use it as a pencil box. Anyway, when I saw it, the size and shape screamed "tower" at me, so I had to pick it up. Still a few things to add, but it's getting close. One thing I learned is that on conical roofs, I really should go with individual tiles. As it is, I went with short strips, but that made it look very shoddy. But that works for me too. 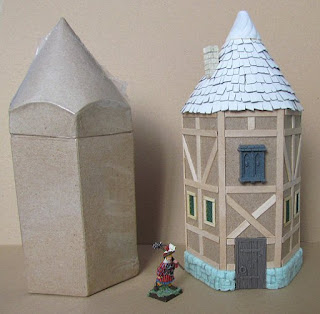 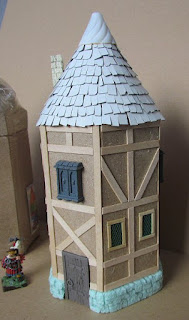 I﻿ used some fine plastic mesh for the windows, which will hopefully give the impression of leaded glass when painted: 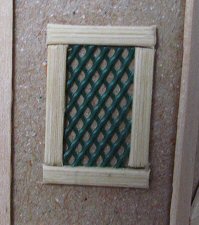 Finally another update with a newly painted figure. This is a captain with warhammer from the very unique Lead Adventure Miniatures Bruegelburg range. I'm quite relieved it is finished, not because I didn't like the sculpt, I think it's great, but because it seemed like it was an accident riddled experience. I lost count of the number of times this got dropped, chipped, splattered with paint from another project, dropped again and got the hand reglued at least 3 times. But I got it done and it looks good, so moving on! 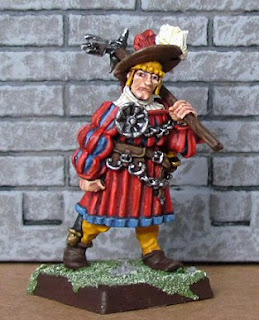 And a quick comparison with Pro Gloria (left) and classic metal GW (right). The scale fits in just fine. 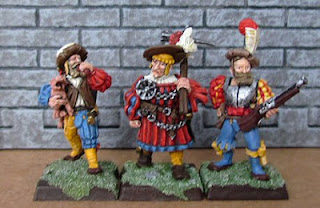 From concept to figure...

Thought I'd show how some of the figures go from concept to mini. If the sculptor is really lucky, he gets one of these rough sketches from me that show pretty much what the final figure is supposed to look like. I usually add a second one in a static pose, with just the clothes and no accessories, for a clear view. 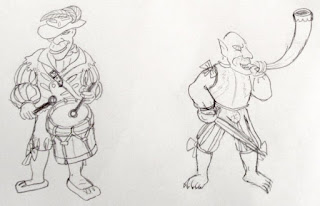 Most of the time though, and especially when conversions of existing poses are involved, what the sculptor gets is this: 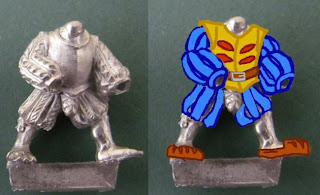 An even rougher sketch, drawn with a mouse over a picture of the original mini. Pretty, isn't it? But it gets the job done. Besides, if the sculptor should feel like complaining, I'll just point out that for some of the early minis, I gave John some written instructions as well as some diverse images where I would say to take the pose from that, the clothes from that and that, add a hat like this, etc... We've come a long way, really...
Oh, and in case you're wondering as to how faithful to the artwork the final figures end up being, here are the three figures that were used as an example (ok, the hornblower was still WIP, but the only other picture I had was without the swordarm).