Lord Commander of the Witchhunters - Green

The most fierce and feared of all the witchhunters is their Lord Commander, sometimes referred to as the Witchhunter General. The model is a bit of a collaboration between two sculptors, as the basic horse blank and armoured body are the ones done by FP, that also serve as the basis for the mounted knights and the additional detail is sculpted over that by Mick Darpa who did the footknights and witchhunters.

A close up of just the rider, with his pet raven. 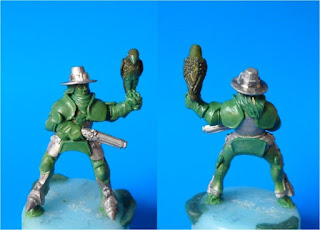 I initially wanted the horse to be a singlepiece casting, but when I checked with the mouldmaker, he was of the opinion that it would be too wide and wouldn't cast properly (which I guess is why these type of barded horses in metal are usually multipart). Not wanting to go the split in the middle route I tried to work out a way to keep the naked horse body one piece and the barding separate. As the thin barding pieces from the mounted knights presented their own challenges in moulding, I wanted more solid pieces, which meant reducing the bulk of the horse body. Fingers crossed that it will all work out as planned in moulding. 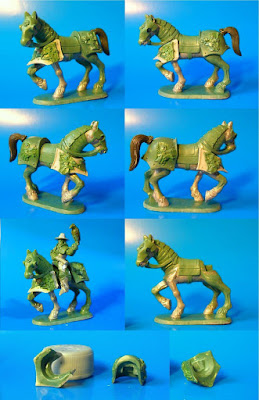